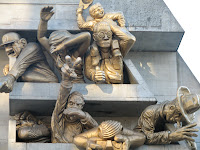 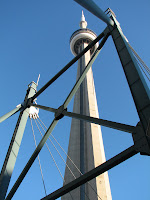 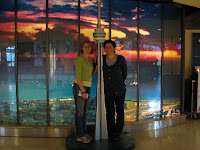 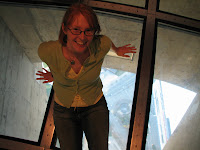 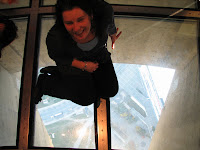 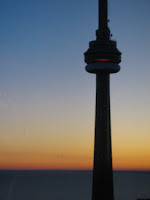 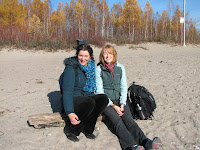 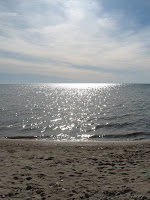 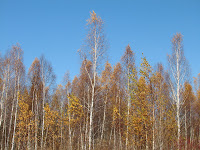 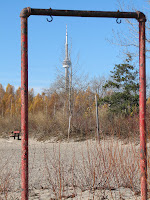 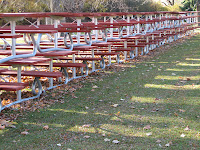 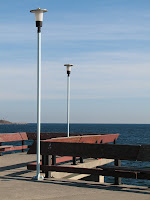 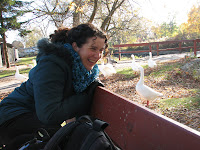 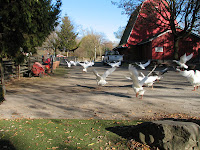 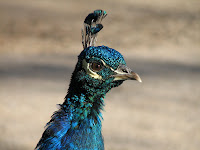 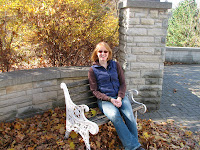 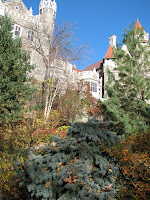 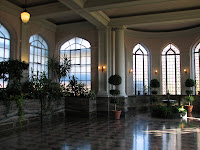 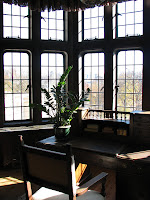 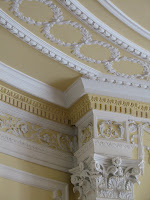 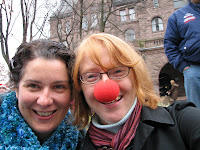 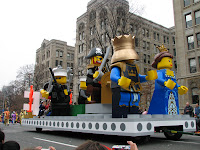 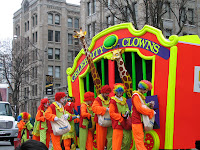 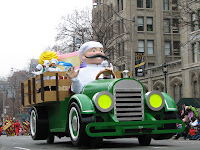 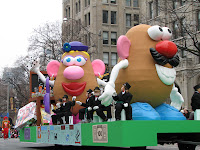 Posted by Maureen Ewing at 3:40 PM No comments:

Toronto: Beans on Toast and Other Experiences

There's something about being able to go to a foreign destination in under two hours from boarding to baggage claim. It feels so easy, so good, so refreshing! No cramped legs from the long haul flight... ah, but no vegan meal and hours of movies either.

I landed and felt like a real tourist because I needed to change money to get the exact change for the bus. I found the bus but no place to buy anything to break my bills, but the bus driver was all friendly Canadian and said with a smile, "Get on!" So a free and quick ride later we were dropped off at the subway, and I looked all over for a place to buy a ticket. But no, it's free for some reason. When I have to change lines, I just went up one tiny set of stairs and voila there's the other train. No long underground passages and endless escalators or staircases. What is this place?

I head to the hostel, am told Claire has already checked in, and I'm up to the 9th floor penthouse :) for our private bunk bed room! There's nothing like seeing a friend that you only see once a year and the visit always requires a customs check. So for four days we explored the city and caught up with each other's news.

The best way to see a city is just meander, and that's exactly what we did that first day. The sky was a gorgeous blue, so we decided it made perfect sense to go up the CN Tower and pose on the glass floor. The whole time we were there I referred to it as "the needle" as Claire, Chris, and I had last been up the Seattle Space Needle in 2007. I quite enjoyed the view from up there, but the glass floor left me a bit squeamish. Funny how the pit of your stomach can change from calm "look at the pretty city" to "oh, what if the floor broke and i fell to my death?"

As we were leaving the tower, the sun began to paint the buildings a light orange. I suddenly remembered reading about a restaurant/bar where it's a great place for a sunset. Up on the 54th floor of an innocuous office building, we stepped into a somewhat swanky bar. I quietly asked the hostess, "Is there a dress code?" She just smiled, all friendly Candadian, and said no. So, we perched ourselves and enjoyed a drink while the sky went orange to violet to dusk. I was quite impressed by the local Ontario wine selections, and I had to sip local.

Our meander continued up and around the city, looking for an Indian restaurant. Nothing stellar, but it satiated. I mean, really, at some point, decent Indian is better than anything I'd ever make! Then we trekked back to the hostel kitchen for the first of many ritual cups of tea brought from our own stashes. How anybody can drink that much earl grey and not be up all night is beyond me. It must be in Claire's British genes...


Day 2: Beans on Toast Part I (oh, and the Islands and the Play)

Can it get any better than beans on toast while on vacation? Our private room included free breakfast every morning, and while Claire got the proper British Breakfast, I voted for b-on-t.

Upon seeing another blue sky out our penthouse windows, we decided the Toronto Islands had to be done. We packed up our extra layers and went in search of a packed lunch for the jaunt. We went to freshii (mmmmmmm) and meandered to the ferry. I admit to being very entertained by the size of the wagons the bikes pulled. Apparently, many people live on the island, but there is no store...

Claire and I spent the next four hours strolling around the island: the beach, the boardwalk, the closed amusement park, the farm, etc. While you walk on one side of the island, you can't even tell there's a big metropolis on the other side. It's just peaceful water lapping on the sand, and you strolling along.

Our most entertaining adventure came as we found the farm animals. Suddenly I found myself staring at two horses who weren't hooked up. Now I love horses, but the sight of one taking a casual stroll towards me freaked me out just a little. I admit... The very large pig, the goats, the sheep, the mules, and the chickens were all fenced in, but the peacocks and horses just wandered about. The geese and duck were in a battle of noise and territory, so they just kept aggravating each other. Why do they look so cute when they tuck their little beaks in their feathers?

We caught the ferry back to the city and wandered past the theater where 7 Stories was playing. The friendly Canadian said we could come back at 7pm for half price tickets (since we were not paying those full price tickets! ouch!). So, back to the hostel for some tea, a change to the going-out outfits, and off we went to the Thai restaurant across the street for our pre-theater dinner. Even in Canada, Thai food is served faster than you can say, "I'll have..."

We chose the play as it was the 20th anniversary and a modern Canadian classic! A guy climbs to the ledge of an apartment building to kill himself (7 stories up), and he has all these random conversations with people out their windows. The old lady and the nurse were the best. So funny and strange.

I am not going to tell you again how delicious the breakfast was... We made our way up to Casa Loma, an enormous house built in the early 20th century. When I say we made our way, we made our way up, up, up some steps. Cool rooms and history, quiet gardens, and even an exhibit on the woman who started Canadian Girl Guides (obligatory photos, of course). No people in costume (bah humbug).

After our tour we tried to ask the friendly Canadian staff how to get to a nearby road, they all proved to be dense Canadians. None of them had even heard of that road. We trudged and eventually found a cute guy gardening, and he sent us the correct direction. Claire was feeling the 3-headed hungry monster (unusual that it wasn't me this time), and when we got to the French restaurant it was closed. Dire situation called for Subway.

Hunger monsters abated (mine was beginning to rear it's ugly head), we trekked down to the Beta Shoe Museum. What a museum! Fascinating. They had so many different types of shoes from ancient Roman sandals to moccasins to Chinese shoes for women's bound feet to Elton John's platform boots. By the time we made it to the top floor exhibit, we decided that it was the appropriate place to take off our shoes and wander. I really recommend this museum if you are ever in Toronto.

We tried to find the theatre where The Madonna Painter was playing, but we were way too far north. We settled for tea and cake and went back to the hostel. We decided on dinner and a movie. Off we went to the Richtree Market for a really fun dining experience. It's one of these multiple station markets. They give you a card to swipe as you pick up your food. Then, when you leave they swipe your card and you pay. The problem is the bill gets high very quick! I had a gorgeous salad, stir-fry, and wine. Delicious.

The Men Who Stare at Goats. How can you not love George Clooney and Ewan McGregor in a movie together? Of course, Ewan is sexiest when he's belting out songs ala Moulin Rouge, but any Ewan is good Ewan. There's something about going to see a film with someone who laughts (dare I say cackles?) throughout the movie--it just makes me enjoy it even more. I was like the hyena after the lion. She'd laugh, and I'd echo.

I admit that I am a bit jaded on the whole Christmas parade/Santa thing. I don't know why, but I just am. That being said, I'm very glad Claire was all twinkle-eyed about seeing the Santa Parade. We staked our claim around 11:30am, people watching and kid watching. Families had brought along their hockey sticks and were hitting balls (luckily not pucks) in the street as we all waited for the parade. Vendors came rolling down the street selling candied apples and antlers and clown noses. Claire got the apple. I got the nose.

Finally, after much waiting and cold butts, the parade inched closer. Police cars and sirens. Postal workers and walking mailboxes collecting letters from the kids in the crowd. How cute to see the kids run into the street to hand over their santa letters. Then a flood of clowns. I'm not talking one or two. I'm talking hundreds. They're called "Celebrity Clowns" and they pay money to be a clown in the parade, the money going to charity.

The floats were alright, nothing spectacular, but there were kids everywhere. I was ideologically opposed to taking a photo of the Barbie & The Three Musketeers float. There were bands, lots of bands, from professional bag pipers to high school bands. Finally, my bladder was none too happy and my butt just a little frozen, and we made our way up to the Royal Ontario Museum, seeing Santa and his sleigh just as we arrived. Oh, and Mounties. We were very excited about them!

I admit that I saw nothing of the permanent collection at the ROM. We did see the interesting temporary exhibits: The Dead Sea Scrolls and The Vanity Fair Photographs. I do love a good archeological story, and well, I am an amateur photographer! I did take a few photos of the big totem pole...

For our last night in Toronto, we saw The Madonna Painter, another Canadian play that was being shown in its first English translation. Both Claire and I seemed to enjoy this a bit more than the other play (and at 1/3 of the cost), but both had weird endings. So, friendly weird Canadians :). We even were able to squeeze in some falafel before the play and a visit to the Tim Horton's (ala Dunkin Donuts) while waiting for the streetcar.

So there you go. We were quite sad to leave Toronto the following morning and quite sad that there was no Tim Horton's in our gate area in the airport. I really like Toronto. I'd go back in a second. I'd really like to see their wine region, to visit the rare books museum, to attend the film festival. Tell me when you're going, and I'll meet you there!
Posted by Maureen Ewing at 10:31 AM 1 comment: