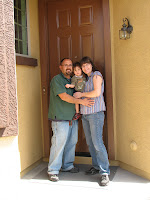 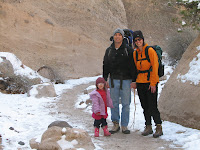 It's April 5, and my travel bug is beginning to itch much like my spring fever. I have no international ticket bought for 2010. YET.

I cannot complain though, since I just returned from an amazing visit out to New Mexico and Arizona to see friends and their families. Some heat, some snow, some hiking, some museums, and lots of conversations and hugs. It's been awhile since I've been in their homes and face to face. Wonderful.

During my trip, I read and reread an essay published as a small book entitled A Small Place by Jamaica Kincaid. It's an essay that makes you look back on all your arrogance (even when you were trying not to be arrogant, trying to not be the ugly American, trying to be the tourist who really tries to see things) and think Who did I think I was fooling?

It's a beautiful essay, for its craft and tone, for its sincerity and sarcasm. I take no offense at anything she writes because as a middle class white American woman, I really have no room for complaint or false humility. I am fortunate, and I know it.

What disturbed me was half way through the book a previous owner (I bought this book at a thrift shop) began to make comments.

Kincaid writes, "Have you ever wondered why it is that all we seem to have learned from you is how to corrupt our societies and how to be tyrants? You will have to accept that this is mostly your fault. Let me just show you how you looked to us. You came. You took thinks that were not yours, and you did not even, for appearances' sake, ask first."

The previous owner writes in the margins: NOT (and underlines it)

Then Kincaid writes, "Do you know why people like me are shy about being capitalists? Well, it's because we, for as long as we have know you, were capital, like bales of cotton and sacks of suger, and you were the commanding, cruel capitalists..."

And the previous owner writes, BS (and underlines it)

Then Kincaid writes, "Even if I really came from people who were living like monkeys in trees, it was better to be that than what happened to me, what I became after I met you."

And the owner writes, "Barbarians!! Upset at Human Evolution. The world becomes a much smaller place."

It's a strange experience to read a book so poignant that stirs up all the thoughts about previous trips and future ones. Then, to come across marginalia that makes me want to find this person and argue with them. Who does she think she's fooling?

Then, I pull out a new book to read, Three Cups of Tea by Greg Mortenson and David Oliver Relin. Talk about a book that makes you wonder if you've just been wasting your purpose, locking away any gifts you might be lucky to possess, while some people go out into the world and do such amazing things of their own motivation and commitment. Not charmed lives, not easy lives, but gritty and tough and exhausting and meaningful. Makes me want to shake up my life again, but maybe this time do something not just for myself and not such short term.

I wonder what Kincaid would think of Mortenson. I wonder what she would think of me. I've been thinking of writing a book of travel essays or travel poems entitled All the Things I Didn't Do. Sometimes, it's these things that stick with me, almost like a travel grudge. I didn't do it, so it lingers and shakes its finger at me and says, Now, why didn't you do that, Moe? Why didn't you?