On our second full day at Sangam, we had a full schedule:

We started at 7am with a yoga session by a local woman. Iyengar yoga is the style I do most, so I loved it. The room was packed, and my back was very happy.

After breakfast, we were given the Wadi Challenge. The girls were given a map, a list of things to find, and a rickshaw bag that had the address to Sangam and some money. Our task was to walk to the Wadi Neighborhood (about 15 min away) and try to find as many things on the list as we could.

It was a fun few hours of wandering, and while we didn’t do much on the list, we still enjoyed it. We went on the overpass bridge for a great view of the traffic converging from four or five different roads. We went inside a temple and took a photo with a little girl who wanted one. The girls wanted to go into a clothing department store, and they enjoyed looking at all the different clothes. We might go back there before we leave, if they haven’t gotten their shopping fix the next few days. On our walk back to Sangam, the girls were getting the hang of aggressive street crossing; you’ve got to find a gap in the traffic and go for it! 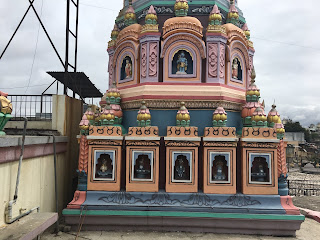 After lunch we enjoyed a Hindi lesson, which included learning the numbers, alphabet, and colors. They had us do a few games with translation and colors, which taught us how hard it is to learn a language and help it stick.

The highlight of everyone’s day was the afternoon Zumba Bollywood session. We all sweated through our clothes doing it in the hall without AC, but it was a nice compliment to the morning yoga session. Uzma has chosen a great selection of songs and a variety of new moves to each song.

After dinner, we gathered in the hall for Bollywood movie night. For the first ten or twenty minutes, they didn’t have the subtitles on, and when they did turn them on, we finally understood what was happening. (See my other post on talking about menstruation in India) Pad Man was a hilarious movie about a man’s attempt to get women access to pads. There were amazing moments in the film (like when he realizes he has to test the pad and comes up with a contraption to wear), but a sad lack of music and dancing! Regardless, it was a film I wouldn’t have known about.

Despite having to get up early, the morning yoga session is so great. Today’s was less crowded, probably because it was raining and people stayed up late due to the movie.

After breakfast, we split up into two groups for Indian Art sessions. A small group did embroidery, but the majority of us did Waldi Art. This type of art originated in two villages (located between Pune and Mumbai), where for hundreds of years, they’ve done paintings on the walls of their houses. I really enjoyed the lesson about how to make people, animals, trees, and sun/moon/stars. We then had an hour to create our own drawing. If only we’d learned how to draw figures like this, I might have lived drawing more growing up. In Waldi art, you don’t have to draw faces (just a circle and color it in) or bodies (just two colored in triangles make a body). 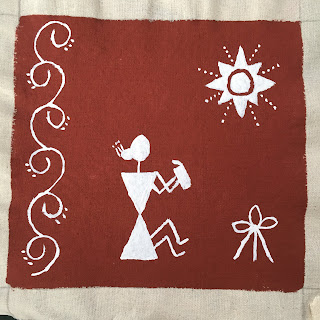 After lunch, we took rickshaws to Laxmi Road, which is a market area. Since it was Saturday, traffic and crowds were heavy. We had less time as a result and the afternoon was a bit rushed, but we were able to purchase fabrics, try on and buy saris, and buy Punjabis. I wish I would have bought material for some tops, but I was too focused on helping the girls. I did buy a sari, which I like. We then walked through town to a few different places to buy bangles (bought some for my new Saree), bindis (as a married woman, I bought red ones with a little bling) and henna. 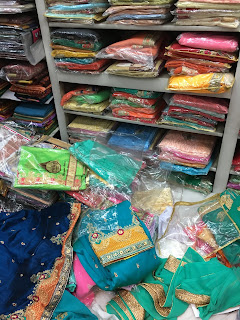 The girls then had to walk around a fruit and veg market and find a particular item. They were given a word in Hindi and a local language. They had to go around and ask if they had the item, not knowing what it was. Some girls found sellers that helped direct them to the right person. Each group was given 10 rupees to buy enough of that item to bring t back to Sangam for the kitchen. It was a pretty great exercise for the girls, and I enjoyed watching them figure it out.

We then walked to our dinner spot, Archana restaurant, a vegetarian restaurant. We had dal, rice, and potato and cauliflower. So so good. I knew I’d eat great on this trip!

After dinner, we went out to catch the local buses back. Many girls aren’t city girls, and I admit to being a little intimidated, too, by the rush to board the buses. People crammed in, and we kept each other upright by smashing together. We had to change buses once, and I was super grateful we didn’t have to navigate this ourselves.

Back at Sangam, the tailors arrived, and we all got measured for the saris and punjabis we bought. I’m a few days, they will be delivered to us just in time for our last night celebration.
Posted by Maureen Ewing at 11:32 PM