A Tour of Delhi

“Do not make eye contact with the monkeys.”
-Shiraz, our tour guide

In preparation for going to Delhi, I watched the “Delhi” episode of “World’s Biggest Cities” on Netflix. Here are some facts: Delhi has 26 million people, more than Australia; the city is the size of Belgium; it will grow another 10 million in the next 10 years; the Fruit and veg market is 80 football fields long. So yeah, this place is big.

We arrived yesterday late afternoon and were greeted by a friendly man from the tour company. He escorted us to a lovely big coach where all our luggage went underneath (thankfully not in the aisles like our Mumbai bus). As we boarded the bus, we were given a flower garland and a welcome gift (journal and pen). We all felt truly spoiled, especially with extra seats to spread out and AC. it took us about an hour in rush hour traffic to get to our hotel. 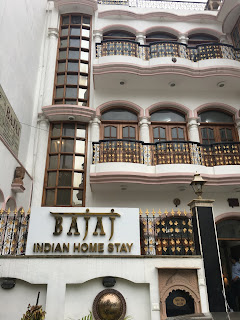 When we arrived at the Bajaj Indian Home Stay, which felt like a palace. Sangam is absolutely lovely, but this was a marble heaven. We were given a rose, the welcome blessing, some boxed mango juice, and our room keys. All of us chaperones unexpectedly got our own en-suite rooms. Talk about luxury. Everyone’s rooms are air conditioned, and in the Delhi heat, it feels great. We decided to have dinner at the hotel, so we took an hour and a half to relax after a long travel day.

This morning, we were up for breakfast at 8 and a tour of Delhi at 9. Our tour guide for the day, Shiraz, has several history degrees, and he was an excellent source of knowledge today. His big piece of advice was to NOT look the monkeys in the eye if we saw them; they would happily jump on us, which we would not enjoy. (No monkeys were seen in close enough proximity!)

Our fist stop was the Mosque Jama Masjid, India’s largest mosque. We came this morning because it would be closed in the afternoon for prayers. We women had to put on robes to walk around, and they were bright colors and very hot. It was 300 rupees to take photos, so I was the group photographer. I took my usual Moe artsy shots and then took a few photos of the girls. It’s a beautiful building with a large courtyard. I bet it’s a stunning sight when it is full for prayers. 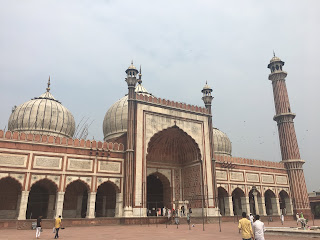 After our tour, we hopped on cycle rickshaws for a tour of Old Delhi and its winding streets full of shops and markets. Our driver worked hard in the heat, and he let us know it was hot. We weaved in and out of people, fruit and veg carts, mopeds, motorcycles, and in larger streets, cars and buses. We went through the Ancient Bazaar Chandni Chowk and the Khari Baoli spice market. It was a very bumpy ride, but I managed to get some photos. 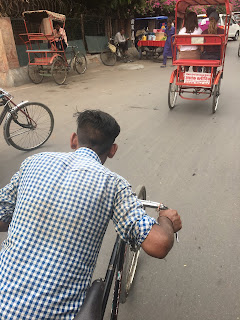 We then hopped back on the bus and made our way around India Gate on or way to Humayun’s Tomb. The emperor’s tomb was built in 1565 by his wife, and it showcases Persian architecture. (His son is responsible for building the Taj Mahal.) As we got off the bus, the air was thick with humidity and the clouds rumbled. 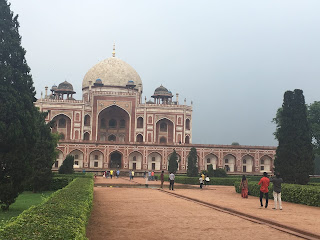 The tomb is built out of red sandstone and white marble, and it is beautiful. It has a wide terrace and you can walk in and out of various rooms where different graves are housed (there are about 100 Mughal graves). The building has interesting geometric patterns around it with a large dome. I loved walking around the building and inside, getting unique views of the different doors, the play of light, and the views of green all around it.

And then it chucked it down. I had my rain jacket but not my poncho. It seems everyone else had finished before me (I wasn’t late!), and got soaked getting to the bus. Kenya waited for me at one of the gates, and we walked back in the rain together. I got soaked but my rain jacket kept my camera and purse dry!

Shiraz took us to a nearby restaurant, where we enjoyed some hearty appetizers, including spring rolls and naan. The food, the wet clothes, and the humidity began to slow us down. Outside, as we left, there was a snake charmer playing, a little boy trying to sell us bangles, kittens roaming the square, and the sound of horns in the nearby road.

Back in the car, we drove again past India gate, as well as the massive President’s House. There were lots of security blocking roads, so we couldn’t get too close. It’s an area of Delhi that clearly shows the stamp of the British: wide thoroughfares (similar to London’s Mall), Roundabouts that are pretty mini gardens,  big trees that were planted in 1911 (or so) when this part of he city was built, and lots of English style buildings peppered throughout. It was too difficult to stop, so we just drove past.

Our last stop of the day was the Sikh shrine Bangla Sahib Gurudwara. Whereas the Mosque and Humayun’s tomb were red sandstone and marble, the Sikh shrine is all white. We went into the foreigners room and took off our shoes; then, everyone had to put on a bandana head covering, but I had my scarf and used that.

Once inside the grounds, we went into the Kitchen Langar, where 10,000 people are fed each day between 11am-4pm. We watched as one group was leaving, the floor was cleaned, and then another group was seated. They get metal trays and then volunteers come along and fills them up with various things. Everyone eats together in a row, with no designation between anyone, everyone equal. We toured the amazing kitchen where volunteers make everything: vats of food, chapati making areas, and chai. The girls were allowed to join the volunteers to try their hands at making chapatti.

We then went through the inner temple, where we heard Kirtan, singing of scriptures. The room was bright gold with a pink drape over the main “altar” (I don’t know what it’s called and we couldn’t take photos inside). It was really a beautiful place, and I’m curious to learn more about it.

We are now back at our hotel with a few hours to nap and chill before 7pm dinner. Tomorrow we head to Agra at 8am!
Posted by Maureen Ewing at 6:37 AM