“In order to drive in India, you need good  brake, good horn, and good luck.”
-Shiraz, our Guide

On the way out of Delhi, we passed over a bridge that had solar panels and green walls (ie plants on the fence). We passed a few monuments and parks. We got on the large Yamuna Expressway to Pune after an hour making our way through Delhi. Out of nowhere, there was a cow on the road, which caused everyone to slow down and swerve. Our guide made a passing comment that animals are safer then people in India.

We passed a formula 1 track, the cricket stadium, and clumps of expensive high rise apartments. We passed a rest stop with a Starbucks, and the one where we stopped had an American sweet corn stand. I found some peanuts and most of the girls bought Oreos. We passed a camel pulling a cart to everyone’s delight!

Shiraz explained many things to us on our 4 hour drive to Agra: Delhi culture, Hinduism, etc. One thing I didn’t know was that the Swastika symbol is clockwise as a Hindu symbol and counterclockwise for the Nazi symbol; it was a helpful clarification since you see it everywhere here, and in Hinduism it symbolizes prosperity and good fortune.

He also talked about his family, educating his daughters, and wedding traditions. He told a hilarious story of how a tour of Scottish people told him that a man should drink coffee to make sure he has a son. When he told his wife this story, she suddenly started serving him coffee all the time, and now he has a son. 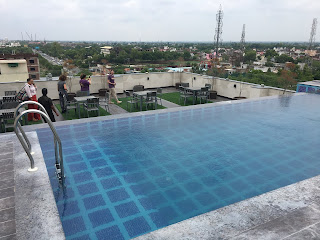 When we arrived in Agra, we checked into our hotel first and were thoroughly impressed. The Hotel Royale Regent is new and felt like luxury, especially with the roof top pool. No time for swimming yet! We dumped our stuff and went out for a quick lunch. It was one of the best tasting meals we’ve had, especially the potatoes.

Our first stop of the day was the Agra Fort. This spectacular building is another blend of red stone and white marble. As Shiraz took us on a tour, he graciously stopped in the shade to talk to us. It was a scorching day, and we were all dripping. The inner garden was especially pretty with its white marble and pretty views of the Taj Mahal. There is some marble inlay work here, but Shiraz just kept saying it was nothing compared to the Taj. 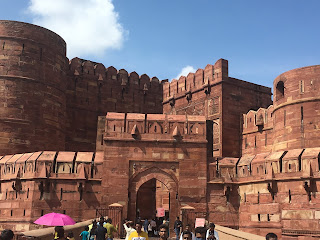 Soon we were all wilting, and it was time to get on the bus for some AC relief. Thank goodness for this comfortable bus! We then went over to the Mahtab-Bagh (Moon Garden). These pretty orchards have a beautiful view of the Taj Mahal just over the river. We were hot and sweaty, but it didn’t stop us from taking group photos and selfies. 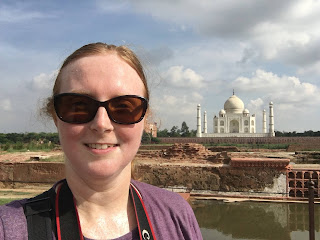 Whenever we got back on the bus, all the boys and men selling things would come to the door. Shiraz would bargain with them for good deals on items. He would then show it to us and say the price; Ashley would then walk it through the bus and collect money. It was quite a fun ritual, though new things were not seen after awhile.

After the garden, Shiraz took us to a cafe run by women who are acid attack survivors. They were attacked by husbands, mothers, other family, in-laws, and strangers; they were left to fiend for themselves, and even though it is illegal and the perpetrators get some punishment, the woman’s life is forever changed. They showed us a moving video of their stories, and they gave us free drinks for coming. We all donated to them,  and it was an excellent, but too quick experience. One of their daughters (not attacked) did a cute dance for us. Finally, it was time to head back to the hotel for a quick swim before dinner. We enjoyed the pool and the distant view of the Taj. We had dinner in the hotel restaurant, and I had a red curry, which was a nice change. We spent the rest of the evening showering and repacking, as we were leaving early for the Taj tour.

Schedule
5:30am head to Taj Mahal
8:30 back to the hotel: bfast and pack
10:30 leave hotel and visit marble inlay workshop and other little shops
1:30pm head to elephant conservatory
3-5pm at Wildlife SOS
5pm drive back to Delhi airport
9pm arrive at airport

At 5:30am, we gathered in the hotel lobby, some in their saris and Punjabis, others in their normal clothes. Half awake but excited, we made our way to the Taj Mahal. They are very strict with what you can bring inside for good reason, I’m sure. We literally could only have our phone and camera. No pencils. No food. The list was very long. We were given bottled water at the gate to bring in.

A note about the Taj. As you already know, it is one of the greatest love monuments ever built. Shah Jahan built it in memory of his wife, Mumtaz Mahal, and both of them are buried there. (He planned to be buried across the river in a black mausoleum, which he never completed because his son overthrew and imprisoned him.) It took 22 years to build, 20,000 workers, and an impressive amount of other statistics that I don’t remember. 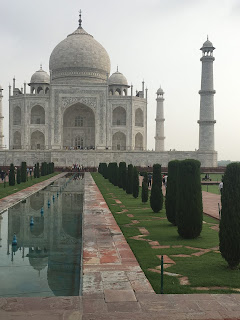 You walk in through a red sandstone courtyard, and the contrast of green lawn and trees is so peaceful. The sun was just rising, and our glasses and camera lenses were fogging up. Somewhere I lost my camera brush, so I agonized over the smears on my lenses. (I did not come here to take crappy shots on my good camera!)

A photographer is assigned to all groups, and he takes a photo of you as a group and then individually at the “Diana Bench.” I was already sweating in my Punjabi, but I’m glad I didn’t wear my sari; I would have found it hard to walk and take as many photos as I did. Shiraz then walked us to the mausoleum, and on the way we witnessed a Marriage proposal. All the girls started commanding me to take photos, which I was already doing. I then went up and asked them for their email so that I could send some photos.

We could not take any photos in the mausoleum, but it was spectacular. The marble screen with the marble inlay is a type of craftsmanship I haven’t seen. Shiraz asked one of the guards to hold up his flashlight to the stones in the inlay work, and it was translucent. So so pretty.

We then took an hour walking around on our own. So many angles to catch. Birds flew in and out of the minarets. The different domes and spires. The gardens, the reflecting pools, the benches. The sky was a pretty blue, and while it was hot outside, it was a good morning to be there. I tried to keep reminding myself to take it all in, not hiding behind my camera. It’s hard for me to do that, but with timed tickets (the max you can spend is two hours, and you will be charged again if you stay longer), there’s only so much time to take it all in. It felt emotional being here, the last day of our trip, almost like a dream. 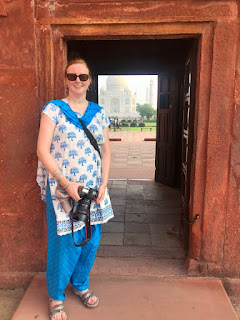 Then just as quickly as we arrived, we departed. I kept looking back and taking more shots, not wanting to miss anything. We had breakfast at our hotel then packed up.

We did a little shopping before we left Agra. First, the marble inlay workshop, where we saw gorgeous pieces of inlay art, such as tabletops. A small 12” round would take two men 20-40 days to complete, depending on the amount of stones used. We quickly realized the small $300 tables were not something we would be affording. So we moved into the small gift room, where our girls had much more luck finding last souvenirs.

We then did a quick stop at a textile shop and a leather shop, and then it was a quick lunch, which turned more into shakes and drinks. Then, we drove an hour and a half to the elephant conservatory.

Wildlife SOS was founded over 10 years ago in response to a great need for rescuing bears, elephants, and other animals from abusive conditions working for street vendors, temples, private owners, and the circus. At the location in Mathura, they have 22 elephants that they rescued and now care for: 8 male and 14 female. Many are elderly elephants  who have physical issues as a result of being in chains, having their ears torn from hooks, and other abusive treatment.

Despite the heat (it was scorching and we all got suitably gross again; our morning showers in the distant past), the girls patiently sat in a hot room, listening to the education director talk about Wildlife SOS, then watching a video.

The highlight was then going out to the pens where the elephants stay most of the day. Shiva, the education director, talked about each elephant, how they were found, and their personality traits. The elephants have found friends here, something they haven’t had in their lives. When they eat, they have to work for their food, and it’s often hidden in a feeding contraption to help them exercise this function. We saw the food storage area, which is a lot of fresh fruit and veg; a white board documents what each animal likes and eats every day. 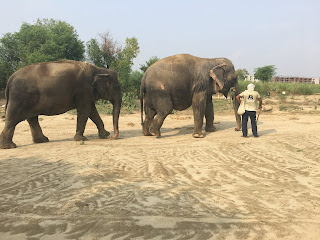 Wildlife SOS bought their land from the local farmers and villagers allow them to use neighboring vacant land for walking the elephants. Their keepers take them out for a long morning walk for 4-5 hours and a short one hour evening walk. We arrived just in time to see them go out for their evening walk. They are such amazing animals, so smart, emotional, and beautiful. However, these animals are still recovering from a lifetime of trauma.

You can learn more and support Wildlife SOS here: www.wildlifesos.org

After two sweaty, educational hours, we hopped back on the bus and started our five hour ride back to the Delhi airport. Our flight was at 4am, so we were not rushed. We stopped for dinner at an oasis type place, where I had my last dosa and samosa of the trip. We all slept on the bus a bit, and soon we were offloading at the airport.

Our long journey home has begun. Five hours in the airport, a three hour flight (where I napped and gave myself whiplash), a three hour layover in Dubai (where I am as I type this), and then a 14 hour flight to Chicago. Some of the girls have an extra flight and/or drive after we get to Chicago. Before we board our flight, we will do a bridging ceremony for those who are moving to a different Girl Scout level.

I’ll do a final thoughts blog in a few days. Right now, I’m feeling so satisfied by this trip. Our girls are lovely, and they all got along so well. We didn’t have any problems with anyone. I feel so proud of them and grateful to have done this trip. It’s been 12 years since I chaperones an international Girl Scout trip, but I thoroughly enjoyed not being the lead chaperone (thanks, Ashley) while helping plan the trip.

Here’s to my 30th country (31 if you count sitting in the Dubai airport), two new airlines (Emirates and Air India). Next stop: Scotland in August!
Posted by Maureen Ewing at 11:30 PM