It’s our last full day in Pune! We found out this morning that our evening flight tomorrow was cancelled, so we have a noon flight instead. We are all packing early to make sure we can fit everything.

Another pretty day in Pune this morning with a yoga class. I love getting up early when everything is still quiet. The only thing we can hear are the birds and an occasional car honk. The WiFi is also the best at 6am with people still sleeping.

After breakfast, we had a briefing on our Pune Challenge. We split up into groups of three (two of our 18 yr old girls leading their own group), and were given a challenge and a rickshaw bag. We had to visit three places, getting rickshaws along the way. We also had to take specific photos and answer questions about each place on our challenge. For lunch, our goal was to find lunch for 30 rupees each, connecting to the UN goal of decreasing hunger. In India, 50-75% (I’ve seen different numbers) of people live at poverty level ($1/day) or below.

Our first stop was the Jain Mandir temple. Our rickshaw driver was nice, but he couldn’t quite find it. He asked at least 20 people along the way, most didn’t know where it was, and some just seemed to know a vague direction. Eventually, we pulled up in front. He wanted to take a selfie with us, which we happily obliged. 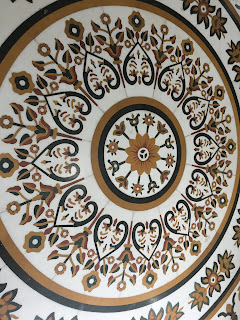 The Jain Temple was beautiful. The outside had a white served facade, and the inside was gorgeous marble. All white walls, a beautiful floor pattern, carved ceilings, and altars of silver and gold. It was stunning. We went upstairs, too, where there was a similar room.

After taking some photos and paying our respects, we went outside and caught another rickshaw. This one literally took us a few blocks, and was only 20 rupees.

Our second challenge was the Shivaji Market. We saw an amazing bull outside pulling a cart of ice, and we watched a man slide a block of ice into the market with old style ice tongs. The market had a wrap different parts, broken up into fish, chicken, and fruit/veg. My girls weren’t interested in the meat sections, thankfully, so we perused the fruit and veg, trying to find things we’d never seen. There were cats, kittens, and dogs roaming the market, and they all wanted pets from us (which we didn’t give). 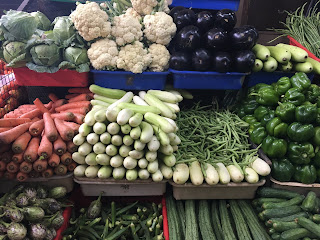 After the market, the third stop was a grocery store, Dorabjees. We came across it the other day, but hadn’t shopped. Today’s challenge was for the girls to find new things and to price the things we normally get at home. They were astounded by how much a box of honey but Cheerios cost ($10 for a small box). Since our task was to only buy lunch for 90 rupees for all of us, we couldn’t find much except maybe a samosa for each from the little stand in the store.

The girls decided they wanted to see the mall across the street. On our way in, they saw a KFC special, 2 chicken sandwiches for 99 rupees. So they are those, and I are a Clif Bar. We saw one group eating at McDonald’s, admitting that they weren’t doing the challenge. We made our way back in another rickshaw. Back at Sangam, we met up with a few of our other groups; they unloaded all the cookies they bought with their 90 rupees, so it was a lesson in how hard it was to eat healthy on so little.

This afternoon was Indian afternoon, which started with a Sari tying lesson. Not everyone bought a sari, but they had extra s for everyone to practice. One of the staff members, Priya, showed us all how to do it, then came around and corrected ours. After we were al folded and pinned in, it was photo time. I served as the group photographer, taking individual and group shots. 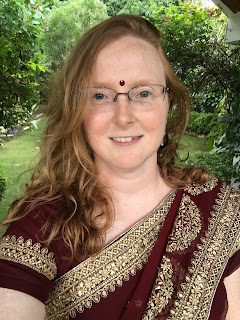 Then the girls started doing the other activities, including badmitten, henna, mandela, rangali, etc. The henna women were busy for quite a long time, but all our hands looked beautiful. However, we now had to be very careful with our saris, and I definitely smudged some on my sari.

Eventually, it was time for our Maharashtion Dinner, a traditional Indian feast. We sat on the floor with banana leaf plates in front of us, already a bit filled with pakoras, papadam, rice, salad, and other things. We also had a mango purée dessert, which was wonderful. The women in the kitchen made such a delicious and beautiful feast for us. 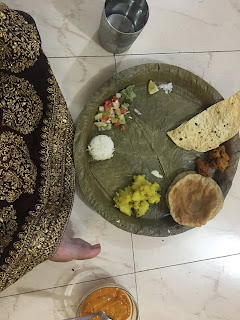 After the meal, those of us leaving before the closing ceremony were given our Sangam pins, which you can only get by coming to Sangam. It was an emotional moment, as I now have visited all four would centers (haven’t been to the new one, Kusafiri, the Africa traveling center). This is a goal I’ve had since I was a girl first learning about them and beginning to travel.

We took off our saris and came down to the hall for a final dance session, the garba (I think). I didn’t partake because my little stubbed toe (walking around in saris for the first time is a little challenging), so I just recorded it.

Now it is Thursday morning, we’ve all had our final breakfast and are waiting to depart. Our bags are all filled to busting (I really didn’t leave enough room for souvenirs and saris). Our flight was cancelled, so now we are on an earlier flight. We are going to partake in laughter yoga and then we are off in the rickshaws to the airport! Delhi heatwave, here we come.