When I first knew I would be studying abroad in England during my junior year of college, I began making copious lists about the places I wanted to visit. It was a “UK Bucket List” of sorts. A former high school English teacher plied me with magazines, and I read everything I could in the study abroad office binders and in books. This was pre-internet days, so I had to scour all the printed matter! My Scotland items included Edinburgh, the Military Tattoo, the International Festival, Stirling Castle, the Highlands, St. Andrews.

Once, 1995
Towards the end of my year in Nottingham, I took the bus to Edinburgh with other American friends for a quick weekend. We stayed in a youth hostel in a deconsecrated church, staring up at the rafters as we fell sleep. We went to the castle, hiked Arthur’s seat, toured the Royal Mile. I don’t remember much else about the visit and I only took a few photos (pre-digital, so every photo counted). I checked Edinburgh off the list but never made it further north. 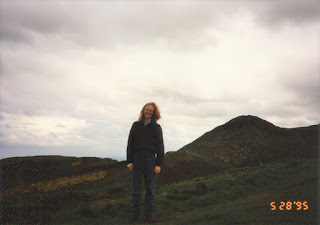 Twice, 2003
Fast forward eight years, and I returned again, this time with my mom. We’d come to the UK for a quick ten-day jaunt, and I asked her if she’d mind heading up to Edinburgh. I was thinking about applying to the MSc in Creative Writing at the University of Edinburgh for the following year. It was a cold November, but we toured the castle, the Royal Mile, and the University. I have a photo of us posing with the blue-faced William Wallace impersonator, aka “Braveheart,” on the Royal Mile. We went to pubs that my mom loved, with names like “Dirty Dicks.” (I was accepted to the program, but I ended up choosing to stay in Chicago to do my MFA instead.) 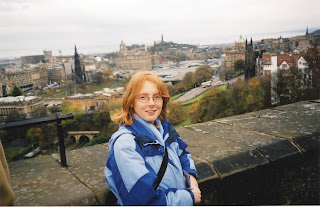 Thrice, 2019
I’ve checked off Edinburgh twice, but most of my Scotland bucket list remained intact. Fast forward sixteen years, and I’m returning to Scotland again. This time, I’ll really make a dent in that list. There are a few more things added, including the Glenfinnan viaduct (Harry Potter train! I have a t-shirt for the occasion), the Falkirk Kelpies, Glasgow (Willow Tea Rooms!), Andy Goldsworthy art, and a long list of vegan restaurants (thanks to #veganscotland & #veganedinburgh on Instagram).

This trip will also include people I didn’t know when I first made that list 24 years ago. I’ll be with my husband for starters! We’ll take a trip to the Highlands with a friend and her mum, we’ll experience Edinburgh with a friend and her hubby, and we will enjoy the Tattoo and the Highland Games with my dad and his wife (okay, I did know dad 24 years ago; it’ll be his 70th while we are in Scotland!), and we’ll join a group of other Ewings to explore our common genealogy.

My bucket list continues to evolve as I age, and my travel spirit has not abated since I first made those lists back in 1994. Instead, my bucket list grows as my knowledge of the world expands. It’s a beautiful world we live in, and every trip counts.

Follow along as I travel to Scotland on this blog and on Instagram at www.instagram.com/maureen_ewing_photography
Posted by Maureen Ewing at 5:38 PM