Day 7
We woke up a bit stiff this morning, probably due to a few hours in those stadium seats and the chill evening air. We took our time this morning, taking advantage of no firm plans to do our much needed laundry.

The machine was an enigma. Todd looked up the model online to try to understand all the buttons. We started it and crossed our fingers. Over the next two hours, we’d be like, is it done? Check the lights. Nope, still spinning. Oh it stopped spinning! Nope, it started up again. After texts to Jayne and Claire for some guidance, we just decided to force it to stop. I pulled out the steamiest pile of clothes I’d ever handled. So we hung them all up and got out into the day. 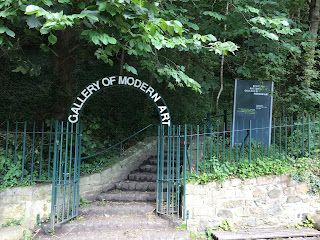 We are right near the Water of Leith Walkway, so we took an amble along the river. So many pretty houses along the way with cute little gardens and patios on the river. We crossed under a huge bridge covered in vines. People were out walking their dogs or babies or themselves. We came to a bridge and right across the river was a gate and path up to The Scottish National Gallery of Modern Art.

At the top of the path, we were greeted by a Henry Moore statue. We made our way right to the garden cafe for lunch. There are two museums across from each other, and we were in Modern One. We had a small lunch (and vegan lemon lavender cake for me) and headed into the Galley.

This building houses the 20th century artists, including Dada, Surrealism, Cubism, Abstract, and contemporary artists. It was quite a collection of familiar and new-to-me artists: Ernst, Picasso, Magritte, Miro, Tanning, Bacon, Hepworth, and so many more. Todd was particularly excited about the four Bacon pieces because the Tate in London didn’t have their Bacon out when we were there in 2016. 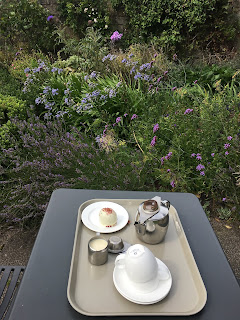 It was a manageable museum, and we were soon back in the cafe, enjoying a pot of tea in the pretty garden. Bumble bees feasted on the nearby lavender while we caffeinated ourselves for Modern Two. It was a pretty blue sky day with a gusty breeze.

We then meandered through the first floor gallery of contemporary artists (I particularly loved the work of Anya Gallaccio), then strolled through the sculpture garden to Modern Two. Jackie and Eric were waving from the stairs. 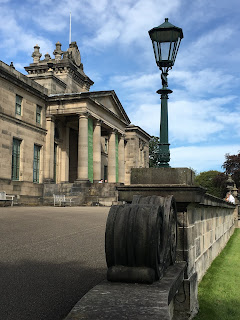 What a great feeling to be back with them (2015 was our last visit; see my blog post about our Tolkien day!) and introduce them to Todd. We were meeting here because of the “Cut and Paste: 400 Years of Collage” exhibit.

Is there anything better these seeing a museum with your talented and artistic friends and husband? Todd has always studied art and loved collage artists. Jackie is doing very interesting textile and collage work (follow her on Instagram). Eric and I also both love/enjoy/appreciate art, so it was a great double date!

The exhibit took up the entire building (6 large rooms), and we took a few hours to explore it, closing down the museum. There was a wide variety of collage, and each room seemed to emphasize a particular movement. The majority was 20th century, but the first room gave an interesting overview of the first 300 years: from the 1700s, to a screen co-created by Dickens, to 1850s photography, to Victoriana. There was an amazing climate-controlled library where books and sensitive collage pieces were kept. Todd said he was itching to see some of the books in there, especially a 1st edition Apollinaire and books on the Surrealists.

Once you moved upstairs, collage seemed to bust out in so many interesting ways over the past 100+ years. Fabric, paint, newspaper, tickets, stickers, all kinds of mixed media. Jackie said she found a lot to help inspire her next series of projects. Todd thought he might find some inspiration for new poems, since he’s started to find some creative space again after school. I wanted to go in a room and play, as I thought about the stack of blurry photographs from my grandparents’ albums. There was a recreated studio of Eduardo Paolozzi, which contained articles of varying sizes and shapes, including models, plaster molds, and Star Wars memorabilia. Collage is one of those art forms where everything feels alive with possibility.

We then tracked down an Uber and found a place for dinner. We all chatted about the day, what’s going on in our lives, politics, etc. Old/new friends catching up. The best kind of evening.

Day 8
After wearing our hiking boots a few days, Todd’s feet needed a rest today, so we took our time this morning. We put some laundry in (it only took an hour this time!) and walked to the cafe down the street. It’s a little diner with a handful of tables, lots of regulars, and standard breakfasts for “sit in or take away.” Todd got the full breakfast (not Scottish, which would have included blood pudding), and I got my usual favorite, beans on toast. Then back to the apartment to hang up the laundry and figure out the day.

We took an Uber near the Festival Theatre, where we would meet Jackie and Eric. A rugby match was about to start near our place, and the streets were crowded with rugby fans in jerseys making their way to the match or getting their drink on in the pub. As we got closer, we passed a wizardry themed shop, so we went there for me to browse. I got myself a cute Harry Potter/LOTR/GOT T-shirt. Perfect nerd combo shirt.

Meeting up with Jackie and Eric, we roamed to find a restaurant. We ended up at Mother India, which was just down the road. It’s a tapas style restaurant, so portions were smaller for sharing. Jackie and Eric, like Todd, are generous vegan friendly eaters, so we mostly ordered vegan dishes. After a filling lunch and chat, we meandered to the Festival Hall for Stephen Fry’s “Mythos: Gods” lecture. Eric has already read the book, so he gave us some perspective on the entire series, since we will only see one of the three lectures. The Festival Hall Dates from 1928, and you can see the Art Deco hints. The stage had a Grecian motif backdrop with a big purple chair lit up in the center. We had front row balcony seats, a perfect view. It was his birthday, and the entire audience sang to him when he came out.

Fry spoke for more than 2 hours with one intermission. He mostly sat in his chair and told stories about the Gods, except when he was doing a game. To keep him from doing too many tangents, he had a trivial pursuit like game where people would choose one of the colors on a specific theme.

Fry’s storytelling was engaging, irreverent, and informative. He took us through the main Gods, the creation of humans, and the beginnings of the interactions between gods and mortals. There was hilarious commentary about the “magic custard” of the gods’ semen, Kronos devouring and then throwing up his children, and Zeus’ anger at Prometheus. We enjoyed sitting back and listening to Fry recount all of his knowledge, making us want to read the book! We thoroughly enjoyed our first festival performance.

Despite still being relatively full from lunch four hours earlier, we meandered to Auld Hoose. I’d discovered it via Instagram by following #veganedinburgh. They have gigantic nachos, including vegan. Since Todd is a fan of nachos, I’d put it on our list! We all meandered over there and decided to have light drinks, chatting and waiting for our stomachs to make a bit more room.

Finally, we decided to order the “Gigantic Vegan Nachos,” which were good for four people. The barman still asked us to make sure we wanted the big one. We knew it would be huge, and it was. We made a valiant effort to eat most of it, but the dish was deep and our stomachs full.

We finally rolled out of there and made our way back into the centre. While it was fun seeing all the crowds out for the festival, it was still too many people. We did dip into Greyfriar’s cemetery and saw some interesting graves and the official monument to Greyfriar’s Bobby, the dog who mourned his owner by sitting on his grave for 14 years. There was a big stick pile in homage to him. 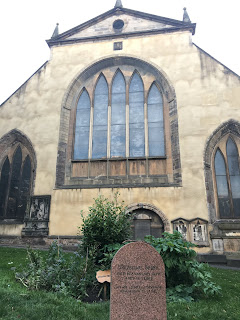 The crowds had defeated us, so we managed to find a taxi (when an uber was impossible) back to our place. Todd gave his back a rest, and I showed Jackie and Eric along the Leith walkway. We went past the bridge to the modern museum, and just behind a tree that had fallen was an Antony Gormley in the river. Todd and I hadn’t been able to see it behind the tree. There’s an AIDS memorial there, too, both somber and simple. 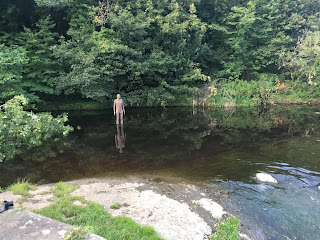 We soon all called it a night, saying good-bye until our next reunion. It was a full two days with friends, and I’m so glad they were able to join us for some art, festival, food, and chats.