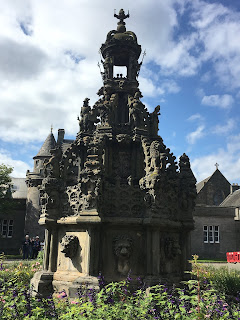 Day 10
It’s our last full day in Edinburgh. We can’t decide what do do: castle or palace... Palace!

We started off the morning at the Palace of Holyroodhouse, the Queen’s official residence in Scotland. A house like this is perfect on a warm, blue sky summer day, as it shows off all its best properties: the simple courtyard, the abbey ruins, the view to Arthur’s Seat, the pretty gardens. I couldn’t stop taking photos, it was all so pretty (no photos allowed inside, so I made the most of the outside).

You start off in front of the building, admiring the pretty facade. An audio guide is included with admission, and it gives you so much great detail. It’s an interactive guide, showing you photos on the screen in different rooms, and even having you rub on the screen to show how a room would have changed over time.

You enter the courtyard, a simple block of grass flanked by the palace on all four sides. You then make your way into the beautiful rooms. The carpets are rolled back where we walk, reminding us that this is a working palace, used for family and state functions. We are only visitors. 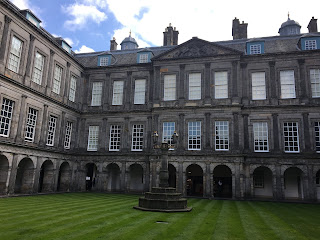 These rooms have been used by Mary, Queen of Scots, Bonnie Prince Charlie, Victoria, and many others. It’s not an audacious building like some other palaces can be. It’s more subtle in its stateliness. There are artifacts, tapestries, paintings, and dishware. There are old beds, including Mary’s and Darnley’s; Darnley’s was huge and behind temperature controlled glass.

The thing I love about film and tv is that they help bring history alive, even if they aren’t the most accurate at times. So having seen “Reign” and “Mary, Queen of Scots,” I knew a bit more of her history than I would have otherwise. Standing in Mary’s rooms, knowing this was her space, feeling the simplicity of it, seeing her embroidery work-it all added to a sense of awe. This part of the palace is the oldest, built in 1528.

Harry and Meghan’s wedding suit and gown were on display, which was a wonderful surprise! I hadn’t known until last night, or I would have been demanding that we go! Having been up at 4/5am to watch the wedding, I feel emotionally connected! Meghan’s veil is as astounding as it looked, with all that beautiful flower embroidery for over 5 meters.

We then exited into the ruins of the abbey, the first of which was built on this site in 1128. It’s lofted ceiling long gone, you can stare up at the sky through the empty window frames. On a beautiful day like today, the blue sky and white fluffy clouds only add more awe and majesty. I love photographing textures, so I took my time roaming around the space. Todd also directing me to take a few shots! 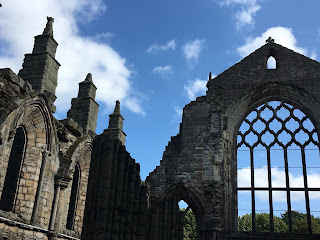 We then exited into the gardens, which takes you around the back of the palace for a view of Arthur’s Seat and the Salisbury Crags. The garden was designed so that it seems like they roll into the hills beyond. It’s a gorgeous spot, and you can almost feel the energy of what a big tea party would bring.

Palace done and time for lunch. Todd found a place up near the National Museum, Mums, so we took an Uber up there. I had a good vegan pie (without the pastry which was sad). We wanted to be near the National Museum to go up to the 7th floor rooftop to see the Andy Goldsworthy work. Todd loves his work, and he’s written a great poetry collection based on it. 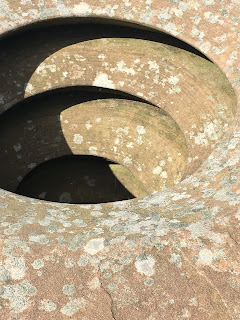 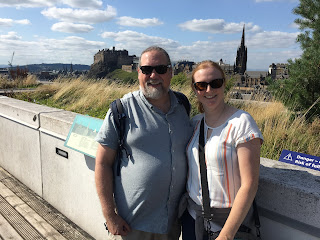 The view from up there is spectacular. You can see all the way to Leith, the full castle and tattoo setup, and all directions of the Edinburgh skyline. The sun felt too warm, which was a welcome and unexpected feeling! Dad and Margaret joined us up there to say hi and touch base before our gallivant to Dunoon tomorrow. A round of photos, and then we parted ways.

Todd wanted to do some shopping (he did!), so we headed to the Royal Mile and the crowds. We meandered up to the castle, found Todd a hat and some ice cream, then we meandered to St Giles cathedral. Since it was he last day of the festival, everyone was out! Bagpipers and other musicians in the street, people queuing up for one last performance, and a little art fair near the cathedral (jewelry souvenir!).

We ducked into the cathedral and sat down for a few minutes. The funky chandeliers stood out to me, as did the gorgeous Pre-Raphaelite Burne-Jones window. The cathedral dates from the 14th and 15th century inside, and the columns are even older, 12th century Norman. 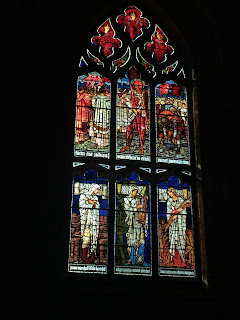 After a few minutes, it was time to make our way home to repack, chill, and have some dinner. We chose not to brave the crowds for the fireworks show. Besides, we saw fireworks at the Tattoo, though I’m sure they weren’t the same.

Tomorrow we check out, go to the National Gallery, then head to Glasgow with Dad and Margaret to meet the Ewing Family Association group for the Cowal Highland Games!
Posted by Maureen Ewing at 5:01 AM