Off to Edinburgh and the Tattoo

Up early to pack, clean up, and then head down to Glasgow. It was a pretty day and a mostly smooth, fast, ride. Claire did all the driving, and she bore the brunt of the changing weather the last few days. The car was packed full, but we fit!

As we meandered our way back south, we watched the different lochs and mountains pass, urging me to come back and see more. I enjoyed every minute of the last few days with Claire and Marie. We know each other so well that we can just slide right into a rhythm. It’s a blessing and a curse of travel, not being near the friends you love.

They dropped us off at Glasgow Central, quick hugs around amidst the city traffic, and we were off in different directions. Todd and I scoped out our train, bought and ate sandwiches, then off to Edinburgh.

Having successfully conquered the uber app in Glasgow, I ordered one in Edinburgh to take us to our Airbnb. Such a cute little place, a very urban and efficient space. It has almost everything we need, including a washing machine (which is being used as I type)! It’ll be a perfect place to hunker down the next few days.

We then went out to meet Dad and Margaret for dinner. They’d found a restaurant near the castle, Vittoria, and we made our way there. As expected, the city is hopping with festival goers of all types. Our uber couldn’t quite make it there with all the festival barricades, so we walked the last block.

How wonderful and strange to see them waiting for us outside a restaurant in Edinburgh! They’d had a full day already with a walking tour and a museum, and they had lots of fun facts to share with us. After an amazing dinner (stuffed eggplant for me, seafood ravioli for them), we meandered towards the Royal Mile and the castle. Dad had a few Harry Potter tour places to show us, including a cafe where JK Rowling spent a lot of time writing and a Harry Potter themed store. We might have to go back to both!

Out on the Royal Mile, the place was abuzz! The doors had opened for the Tattoo seating, and the queue was down the road. I picked up our programs and joined the queue. It moved quickly, and soon we were in the grounds and making our way up, up, up the stands. Another fun fact from their earlier tour was that the stands take a month to put up and less than two weeks to take down. The Tattoo runs for about three weeks with nightly performances. In order to maintain their World Heritage status, the stands can’t be permanent. Quite frankly, they’d be an eyesore if they stayed up! 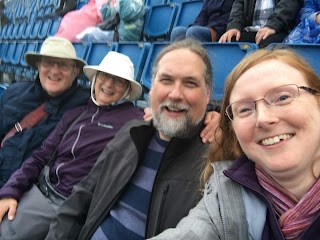 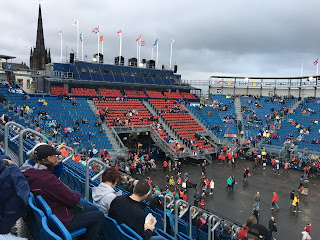 I’ve wanted to attend the Tattoo since I first learned about it 25 years ago. As soon as I bought the flights, I booked the Tattoo tickets. They sell out early, and I knew I’d be disappointed to miss it. It was a fabulous spectacle of music and country pride, with performances from all over the world. This year’s theme was Kaleidoscope, and each group was given a color from Newton’s spectrum, which also honored the Scottish inventor of the Kaleidoscope. 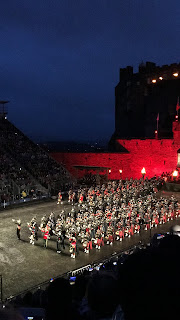 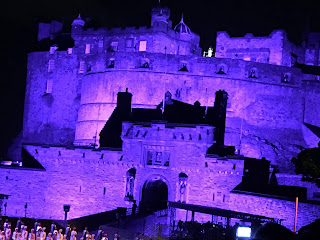 It started with them honoring all colors of the spectrum and the masses pipes and drums. Then each group performed,  highlighting their specific color and their country. Countries came out in this order: Nigeria, Germany, Trinidad and Tobago, France, New Zealand Drill, China, Shetland, Tattoo Dance Company, New Zealand army band, Military Bands of Scotland and Ireland, and then the various finales. I’d say Trinidad and Tobago, New Zealand, the dancers, and the pipe bands were my favorite.

Each performance had their own narrative, and they projected different images on the castle. The Germans were the most funny because they had dancing beer steins! The castle also had different colors projected on it, including the various flag colors. They set off the cannons a few times and then there were fireworks.

The finales were many, including the entire ensemble doing the theme from “The Greatest Showman” and then the pipes and drums marching out. The lone piper played from the top of the castle, and the final drummer played the “Turn off the Taps.” What a glorious evening! 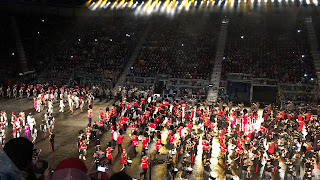 We waited for our turn to exit the stands and made our way down the mile with thousands of others. It was a bit chill now that we were moving. It had misted a bit through the performances, but we didn’t get too wet. The streets were mostly dry, and we went our different ways back to our accommodation. It was a pretty night, and the music hummed in our bodies for another few hours.

Posted by Maureen Ewing at 5:43 AM