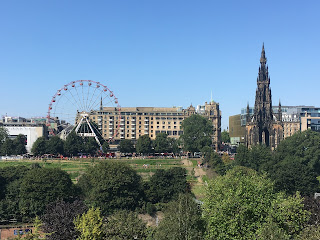 Day 9
The best thing about having an apartment is getting to make your own breakfast and relax. One more load of laundry and then we headed into town. In our Uber we passed by the Belford hostel, where I stayed 24 years ago in 1995; it’s a church that’s been converted into a hostel. I still remember staring up at the ceiling rafters as I fell to sleep, creepy and cool.

Today centered on Ian McKellen, who is on an 80th birthday tour. I originally couldn’t get tickets, but about a month ago a new batch of tickets were released and I scooped them up. Todd and I had seen he and Patrick Stewart in a London play back in 2016, so seeing McKellen twice in such a short time feels like a great gift! 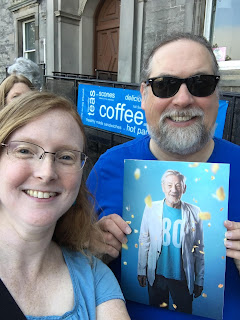 We made it to the Assembly Hall early. The queue had started, and we were towards the front. Since it was general admission, it would be first come first serve, and we didn’t know how big the hall would be. Finally, 15 minutes to curtain, we were ushered in to the wonderfully intimate hall. We had great seats, and the hall was humming with excitement. On stage was a collage of Persian carpets and a box with stickers, like an old steamer trunk but bigger. 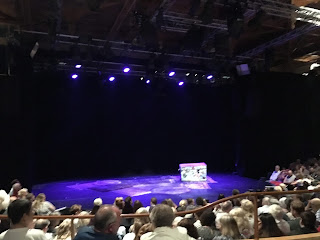 The lights went out and the theme song from “Fellowship of the Ring” began to play and McKellen began to read the scene when Gandalf is at the Bridge of Khazad Dum. The lights came on, and there he was reading the scene, book in hand as a prop, as he read the scene from memory. Todd and I had watched the films before we left, so watching him, listening to him, gave me such a thrill. After he read the scene, he talked quite a bit about his experiences of the film, telling funny stories about how he hadn’t read the books but kept meeting people who’d say, “I read the books every year!”

For an hour and a half, he told stories about his life, his family, and his personal history within the theater. In addition to Gandalf at the bridge, he also did recitations from these roles/experiences:

Throughout the show, he would take things out of his box: Glamdring (Gandalf’s sword), plays/books he’d acted in, his actor’s chair with his name misspelled, his costume for the pantomime. Having never seen a pantomime, it was hilarious watching him put on a babushka, pull out pieces of fruit from his bag, making jokes about the phallic fruits, throwing candy to the audience. It was just a damn fun show.

We bought it was over when he did a speech from Richard II, but he carried on and ended with a reading of Shakespeare’s speech written as Sir Thomas More, a resounding human rights speech about immigration still sadly urgent 400 years on. It’s been 50 years since McKellen first performed on this stage at the Festival, and his tour is raising money for acting companies, drama schools, and fellowships across the country. It took forever to exit the theater, and I soon discovered why as he was personally standing with the collection bucket in the crowd. What a wonderful second festival experience. 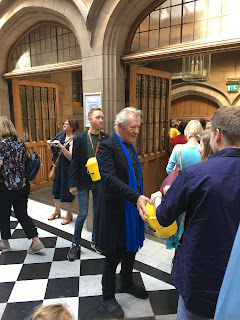 By now, Todd and I were quite hungry, so we went to a nearby restaurant, Makar’s Gourmet Mash. It’s basically mashed potatoes topped with sausages and gravy. Vegan for me, meaty for Todd. So delicious.

One of the “must sees” on the list was a photography exhibit at the National Portrait Gallery, so we meandered our way there through the last day of the festival crowds. The exhibit covered three photographers: Francesca Woodman, Diane Arbus, and Robert Mapplethorpe. It was a small exhibit, but that didn’t matter. It was a wonderful collection of all three photographers, though for me the highlight was Mapplethorpe. It’s the 30th anniversary of his death, and his photographs were being shown for the first time in a gallery funded by his foundation to ensure that there’s always a space for photography.

We then meandered up to see some of the Mary Queen of Scots paintings, but then we decided that we didn’t need to see the rest. I bought a few Mapplethorpe postcards before we left, but I was disappointed that there weren’t Woodman or Arbus for me to buy. My reflection-filled iPhone shots would have to do.

Todd found a cute vegan cafe (Holy Cow) nearby, so we went over for some chai and dessert. Wow. We had bannoffee pie, which had a coconut cream topping, chocolate chips, peanut butter and dates, and a cookie crust. So rich and so good.

We were near the bus station, so we came home to chill in our apartment. We ordered takeout from a nearby Chinese/Japanese place down the street and ate a feast! It’s hard for me to slow down on vacation most of the time, and as much as I wanted to be out and about, I also enjoyed taking it easy.

Tomorrow: our last full day in Edinburgh!
Posted by Maureen Ewing at 2:09 AM