Day 1:
Taking an Uber to the airport was such a nice change, and security was a breeze. However, our flight was delayed because the incoming plane was delayed. But as it arrived, the British Airways staff announced that we might want to watch out the windows as it landed. Wow, the airbus A380 is a behemoth two floor plane. Don’t let that fool you; leg room was tight. We were told at check-in that we could upgrade to 7 more inches of leg room for $380/person. This would have been more expensive than one of our round trip flights, so no (I got great prices on our tickets).

Once we were on the plane, the delays continued. We taxid on the runway for an hour, not that we noticed as we both dozed and jerked away, dozed and jerked awake. It was clear once we were in the air that we would miss our connection. And miss it we did. The only consolation was that they rebooked us on an evening flight and we got some money towards lunch. After three hours waiting, I tried to talk us into the member lounge (I’m a member but not that good of a member). Instead we received some more food money, which mostly covered dinner.

Side note: It’s painful to be in Heathrow and not going into London. It’s against the natural order of my travel belief system.

Our flight to Glasgow went well, and we landed without a hitch. As we walked through the airport, we passed Gemma Whelan (GoT’s Yara Greyjoy) walking to her flight. (After I stalked her on Instagram, I discovered she was at the Glasgow Comic Con.) The hitch arrived when Todd’s luggage appeared and mine didn’t. It turned out my luggage never left Chicago, but it’s on its way now.

I pulled up my uber app, and I thought it was freaking out on me. Turns out it wasn’t, and I am just a newbie who doesn’t understand this app yet... We hopped in a cab to the hotel, where we were greeted with “you must be Maureen.” Last person to check in, but it still made me feel good! Our room was comfy and new and just what our weary bodies needed.

It was already 9pm, so we just stayed in, snacking and chilling out. We found a Billy Connolly special, “Made in Scotland,” on BBC Scotland. What a hilarious and interesting show. Jetlag kicked in half way through and we crashed out.

Day 2
Up at 6am but decent sleep and energy. Glad for my extra set of clothes in my backpack (that’s what 25 years of international travel will get you). Our hotel has a great breakfast, so beans on toast and soy milk for cereal. Happy Moe! Todd even had his first taste of haggis, though I’m sure he could get better. We’re now sipping espresso, Todd’s reading, I’m map hunting and typing this, as the morning rain falls. Vacation, finally...

Our plan is a simple one today. Hop on-hop off bus, Willow tea rooms for lunch, and maybe a museum if our energy holds up.

Glasgow is a manageable city by foot so far. Sunday morning, and the streets were quiet with only tourists seeming to be out.  We walked down to the first stop for the bus and hopped on. It was starting to rain, so we had good timing. We perched in the covered part of the upper deck and listened to the audio guide as the bus meandered along. It’s been about 20 years since I did something like this, and it was much appreciated today. We had energy but it wasn’t zapped too much. 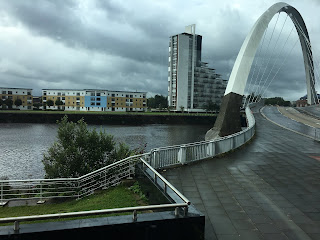 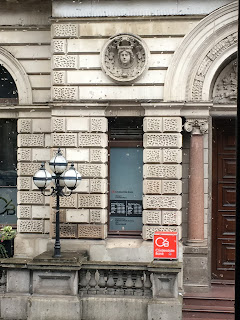 What a pretty town. I love the soot stained buildings and the eclectic mix of architecture. Too many stories to recount from that audio guide, but a few facts/stories stand out: the 500 year old university; the suffragette oak; the last pub in Glasgow to admit women, Tennent’s pub, where women chained themselves up inside and ever since the manager of the pub has always been a woman.

After an hour and a half on the bus, we hopped off near the Macintosh at the Willow tea rooms. These tea rooms were where women could come unchaperoned without causing social scandal. I had reserved seats in the upstairs Salon de Luxe, which was designed by Charles Rennie Mackintosh. 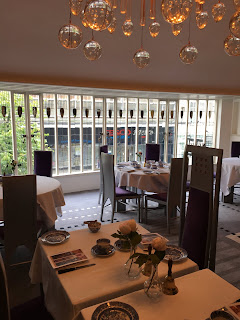 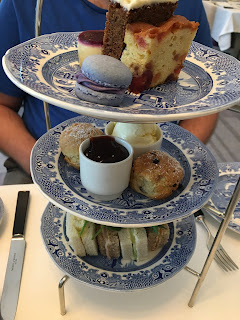 What a beautiful salon. They might not have been the most comfortable chairs ever, but everything about it was pretty: the purple stained glass mirrored walls, the glass chandeliers, the Table settings, the etched water glasses. And this was before the tea trays came out. A full vegan tea tray for me, and a non-vegan one for Todd. Everything was so rich and delicious. I’d say the lemon cake and the scones were my favorite items. Todd was wowed by his salmon sandwich and his lavender melt-in-your-mouth macaroon.

The morning espresso and lunchtime tea could not overcome the soporific effects of that delicious lunch. Thankfully, the hotel was only a block away, so we could head back and literally crash out.

After a brief respite, we ubered over to Kelvingrove Museum since we had two hours before it closed. As is often the case in the UK, the museum was free (huzzah! More money for food!), so we didn’t have to fret about getting our money’s worth. When we walked in, an organist was playing the massive organ. The highlight was Scottish art, particularly Mackintosh and the “Glasgow Four.” So many new artists we didn’t know who were clearly in conversation with artists we do know (Monet, Seurat, Sargent). Our guidebook said the Dali was on loan until 2020, but imagine our delight when it was there! (You were wrong, Rick Steves!) 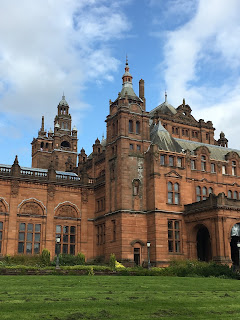 After two hours of art room roaming, we were kicked out with everyone else. We’d missed a rain shower while in the museum, so a pretty blue sky with drifting clouds greeted us. Snapped some photos then hopped on the bus. Todd started talking about food as we buzzed along (there’s Indian! Spanish! Italian!), so we jumped off near our hotel for a walk down the shopping street near our hotel (not so interesting). Back to the hotel to drop off my camera, see if my bag had arrived (nope), and choose a dinner spot. 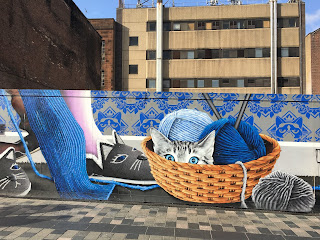 With both of us searching for an open (Sunday night), vegan friendly place (there are tons), Todd found Stereo, a pure vegan restaurant. Man, oh man. Bruschetta, Saag Paneer (tofu not cheese), and a Seitan burger. So many delicious flavors. I told Todd we need a meal strategy when we get to Edinburgh; if the vegan options continue to be this good, I’m going to need smaller meals!

Happy news at the hotel! Bag has arrived but with a bent handle. I was able to straighten it out a bit, but still have to let them know. Just happy it’s here before heading off to the north tomorrow.

Glasgow has been a 24 hour delight! We look forward to seeing it again someday!
Posted by Maureen Ewing at 2:41 PM