Dunoon and the Ewing Clan 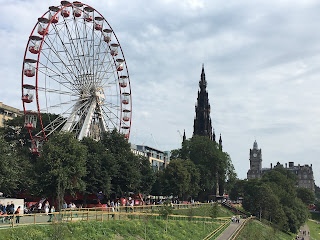 Day 11
We were up an hour earlier than our alarm, so we had plenty of time to get ourselves together for departure. Our plan was to take our bags to the big lockers in the National Gallery and then enjoy the museum for a few hours before the train to Glasgow.

We were there as the doors opened, and the lockers fit all our bags perfectly. The Gallery was a great manageable museum, so we had plenty of time. There are pieces by all the greats: Titian, Tintoretto, Raphael, Botticelli, El Greco, Degas, Monet, Sargent, Seurat, Van Gogh, Gauguin, Cezanne, and so many others. Of course, we saw the “Monarch of the Glen” Scottish Classic by Landseer. I bought a few postcards of my favorite pieces to take home, which is my tradition.  We then enjoyed some espresso and dessert in the cafe, which had a lovely vegan chocolate cupcake. Edinburgh has been wonderful for my vegan self!

We met up with Dad and Margaret for the train to Glasgow. We all stocked up on sandwiches for the quick ride through the countryside. A quick cab to the airport, and we met up with the Ewing Family Association (EFA) gathering at the airport hotel.

There was a hiccup with one of the vans, so we waited and got to know people. The genealogy talk and introductions were underway almost immediately. Which Ewing are you related to (which translates into which century did your Ewing come over to the US in this case)?

It frustrated us to be sitting there for two hours at the airport hotel. Dunoon and our cottage were so close but so far away. A 3:30pm departure soon became 4:30, then became 5pm. We appeared to be short on drivers, so some people were commandeered into driving. Luckily, I don’t have an international drivers license on me.

Our driver, Denise. needed a navigator, so I hopped in the front seat with my GPS. We moved in a caravan of six cars/vans, and we mostly stayed successfully together. There were a few missed turns (no printed maps and spotty GPS) and separations, but since this was a “we must all stay together” scenario, we had to wait for everyone. The closer we got to the ferry, the slower we went. There was an accident stalling traffic, so we ended up missing the last ferry at 6:30pm. Luckily, there was a second ferry location not too far away, so we drove there and waited for the next ferry (every 20-30 min). (I can take credit for this because I had printed up a ferry schedule; I was definitely proud of myself, not humble at all!) 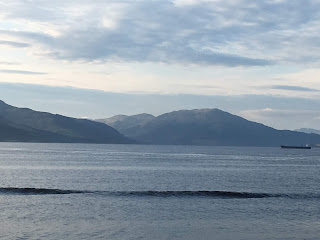 It was a beautiful day, and we all took pictures across the bay as we waited for the ferry to return. Sailboats dotted the skyline and the horizon was grey/blue of the hills and mountains. There was a crisp breeze as we loaded onto the ferry, and once we could get out of the car, we all beelined to the toilets. I then stood on the balcony and took photos.

We finally made it across and to Hunter’s Quay holiday resort. We had to check in, but it was 8:30 and the restaurant kitchen would be closing soon. Todd let the restaurant know that 25 of us were about to descend. An hour later and we were fading fast. Unfortunately, that meant we had to pile into our cars and find our cottages in the dark. Not the most fun prospect. We did it with the help of flashlights! We are prepared!

At 10:30pm, we finally were in our cottage and unpacking/settling in to our rooms. We have a two room cottage with two bathrooms, which is very helpful. It’s cute and just the right size for us. If there’s one thing we’d like, it’s screens on the windows. Why are there no screens on windows in the UK? It’s a question I haven’t asked much. It didn’t stop us from opening them though.

Tomorrow is a full day trip to Ewing ruins, hopefully with somebody else navigating!

Day 12
This morning was an early start. We had pre-ordered our breakfast because it was a 9:30am sharp departure. Alas, the hurry up and wait scenario still prevailed. We didn’t leave until 10/10:30am. More people from the EFA had joined us, so we were a bigger caravan. We piled into cars and made the hour drive to Otter’s Ferry and Kilfinan (I hopped in the back to not navigate again).

Today’s focus centered around touring the  locations where the Ewing clan once lived centuries ago before we lost our land. For most of us who had done the research, Otter’s Ferry was our Ewing promised land. Most of us Americans are descended from Ewings who came to Virginia in the 1700s to a place they named Peaks of Otter.

Our drive took about an hour through the Argyll peninsula. The scenery was beautiful despite the rain. There were a few missed turns, and the last bit was on a small narrow one way road up into the hills. 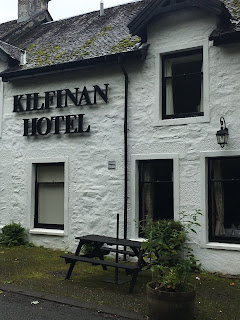 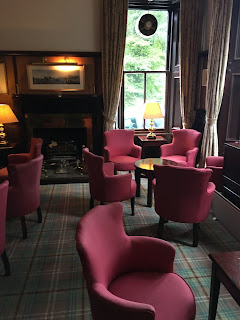 Our first stop was the Kilfinan Inn for lunch. It’s the kind of Inn where you just want to sit in the old pub and read for hours. There were 43 of us, and they had soup (their leek soup smelled delicious) and sandwiches all prepped, with a vegan curry for me (pomegranate seeds in the curry were a revelation!). While everyone socialized, Todd and I went up to the little church. Such a great old graveyard, and the Kilfinan stones, all of which I photographed with abandon. I love these old churchyards (during the day, way too spooky at night).

We had been told to bring our comfortable shoes to take a walk to the site of the old MacEwen castle. It wasn’t so much a walk as a long trudge through cow-pattied meadows, up and over little streams, down onto the beach, up a muddy cow path, across a boggy hill, and then up a final hill to the market. It took about 1 1/2 hours to get there, with it raining for the first hour, then the sun came out, and it was a beautiful day. I had to keep my camera tucked under the poncho for most of the walk there, but I did get some iPhone shots. I loved the walk on the beach, the sound of the waves, the shells and rocks, the jellyfish washed up on shore (though very sad for the jellyfish). 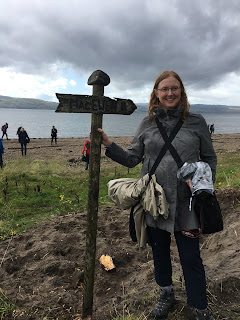 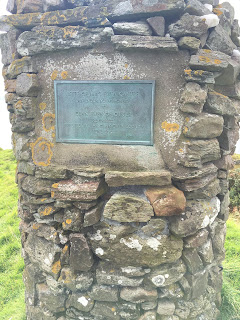 Once at the marker, one of the Ewings took out his drone and filmed the surroundings. Thor told us some history while we were up there, helping us to understand the geography. The midges cane out. The sun started to beat down, but soon enough, the wind came again and the air cooled. It’s true that we got a few seasons in one day!

We all took some photos and admired the view of Loch Fyne. Thor suggested we all take a moment of silence, then Dad took out his Victories experience and asked everyone to circle up and hold hands. Thor said a few words about how this is probably the largest group of Ewings to be up there in centuries. One of the Ewings, Nick, pulled out a bottle of whisky and passed it around.

Now all we had to do was safely make our way down. We were all taking it very carefully because the terrain required lots of attention. If you stopped focusing, you’d twist your ankle or take a tumble. Like always, the return trip was easier and faster, and the weather was glorious. My poncho was long gone and the camera came out. 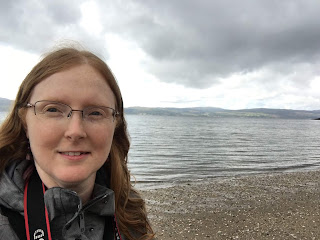 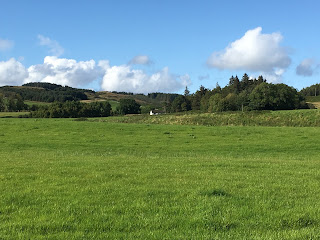 We made it back to Kilfinan and met up with everyone who had decided not to take the “short” walk. We’d been gone for almost four hours. There was one more sight to visit, which was a short drive away. Some stayed in the cars and waited for us to get back.

Thor said it was a half mile walk to the site of the old barony. It took us about an hour and a half to get there and back. Not as rough terrain by a long shot, and a beautiful view along the loch. We made it to the motte and Thor told us about what it would have looked like hundreds of years ago: a few houses and a palisade, perhaps a tower looking to the loch. 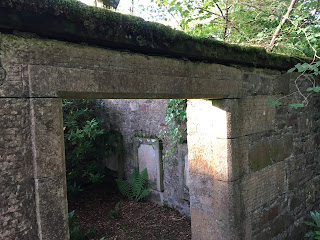 I had a great talk along the road back with Rachel Ewing, a screenwriter from LA. It made the pretty walk even better with creative talk. We all then piled into cars and started the drive back. It was now 7:30pm, and the restaurant back at the place closed at 9. It was a race against the sunset and the road was a windy, roller coaster road with one lane and passing places in case you ran into somebody coming the other direction. There was a sign about sheep in the road, and soon after we came along a group of sheep graising alongside the narrow road. Denise did a beautiful job driving less than idea conditions. It was a stressful drive for most of us. Our day that was supposed to end at 5pm, finally ended at 9!

We crashed out achy and tired but proud of ourselves for making it without injury!
Posted by Maureen Ewing at 11:52 AM