I love how traveling abroad suddenly inspires me to travel locally. Yesterday I traveled down to Springfield, Illinois to see Barack Obama and his new running mate, Joe Biden. I decided late in the week that I wanted to be part of this event, and so I booked an Amtrak ticket leaving at 7am and returning at 11pm. Since Amtrak does not run with the precision of European trains, I somewhat expected that my train would be very late and I'd have to find another way of getting down there.

At 7am, on time, the train started moving and we were off. 187 people on that train were heading down to Springfield. I had my small bag all packed for the day: camera, batteries, hat, sunscreen, enough food for the day, journal and a few pens, and a book just in case. The train was full of excitement, except for the guy who sat down next to me and wanted to read his New Yorker the entire time (I was bursting to meet new people, which is why I went on my own). People were talking about Biden as the choice for VP, and someone said there was a hot debate in the cafe car line. At 10:15am we rolled into Springfield right on time (what? on time?).

The day already felt hot and sticky, so I applied my sunblock, sunglasses, and the dorky hat that's seen me through many adventures. Doors were opening at noon, so you had to join the line and wait. By the time I stepped in line at 10:30am, it already snaked up and down 5 blocks, and it soon curved behind me further than I could see. Campaign volunteers were walking up and down getting people to sign up for road trips to woo voters in swing states. People were walking around selling buttons and t-shirts. Even an Obama look-alike all dressed up in suit and tie and nice cufflinks was walking around taking photos with people (and inching his way up in the line so that we eventually saw him go through way at the begining). People were talking about their excitement and hope.

Then they opened the gate. After security where you had to dump all your water bottles, you could buy water for $2 in open cups and make your way (if you could fit) into the area around the old capital building to wait 2 hours for the event to begin. You can imagine the heat with people standing under the hot summer sun for two hours. People tried to move in and out of the area to buy water and bring it back. I happened to be standing right where the traffic seemed to be moving in and out, and the crowd of us in the situation had nowhere to move. Eventually, security were busy as people were passing out, getting dehydrated, caustrophobic, heat stroke, etc. I stood there overhearing everyone apologize for their crankiness to each other.

Then it was 1:45pm. The energy level of all the sun soaked crowed rose up a notch as Obama / Biden signs were passed around. Then campaign people took the stage and told us how we could volunteer. Then the Mayor of Springfield. Then a former Marine and father of a son lost in the Iraq war who said the Pledge of Allegiance to the American flag draped from a building. Then a priest for the invocation (asking for the safety of the Obama and Biden families). Then the music.

As I held up my camera to catch Obama coming on stage, my eyes started to water then immediately to sting as the tears and sweat caught in sunblock. What an hour that followed. Obama gave a fantastic introduction to Biden and then Biden came onstage. For over a half hour, we listened to the two of them talk about what they plan to do and how they will succeed. People were taking photos and videos, shouting, and listening attentively (except when someone near them started to feel the effects of heat stroke). I think poor Obama is so used to hearing the phrase "the next President of the United States" that he found himself slipping and calling Biden "the next president." Not much I can say about their speeches that you can't read and watch yourselves, so I'll just give you the photos.

After the speech and many photos of the stage once I could get close to it, I made my way back to Amtrak to change my ticket for an earlier train. Sitting down in the station, I started talking with five women who met on the train that morning from Bloomington, Illinois. We all talked for over an hour about the day, our excitement, the heat, and our individual lives. Talking with them was a highlight of the day and fulfilled my hope of meeting interesting people. The train was 25 min late this time, but we were told it was because the tracks were shut down while Obama's motorcade crossed over. We all (except one) were taking the same train, so I sat in the car with them (and the conductor gave me some well-humored trouble about that, as Chicago passengers were supposed to be in front--oh what a rebel I am!). A few of them were sick during the speeches, so I showed them some photos and videos I took. When they left at Springfield, I was sad to see them go, having really enjoyed the conversation.

What a day! I can say I witnessed a part of history with the photos and videos to remind me when I forget.

Enjoy the photos! Barack the Vote! 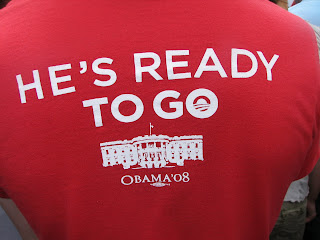 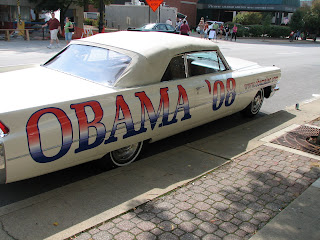 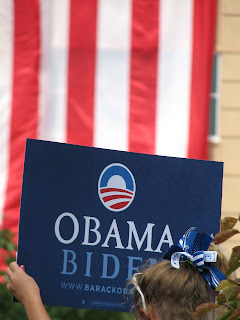 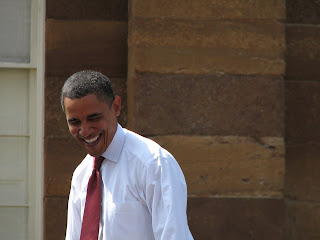 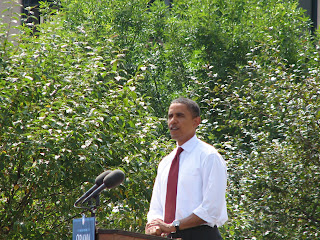 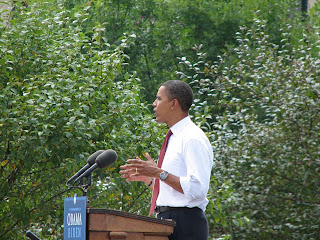 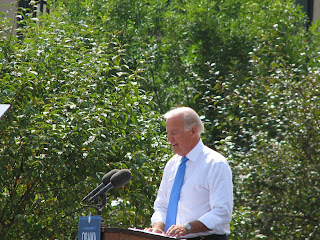 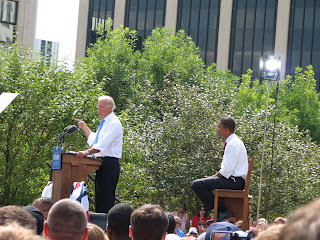 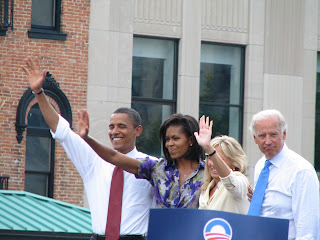 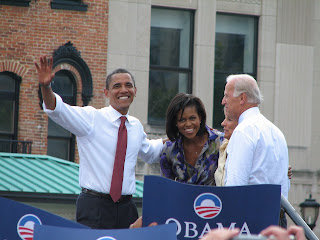 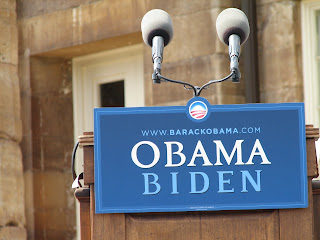 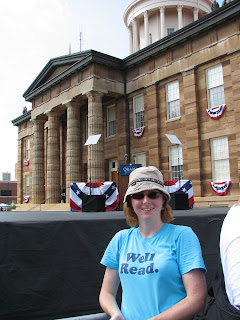 Posted by Maureen Ewing at 9:38 AM

Hi Moe! Wow this is too cool. I shared your excitement with fellow UT Board members yesterday. Everyone was so jealous of you ;) Thanks for sharing. Hugs, Margaret

Hi Moe. Enjoyed reading about your day. Souunds like it was great & horrid (heat) all in one go! I love the pics - looks like you got quite close. Very exciting! Lets hope they do it...